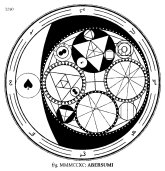 A couple months back I shared a link to the Lesser Bot on the Liber Neglecta Facebook page. Some of the demons it churns out are quite fun, and with a bit of work could make for some fantastic NPCs.

Take Abersumi, the Demon of Pardons. Pardons is such an interesting Word. It implies both guilt and release, an end to formal punishment, a second chance, and a certain degree of favoritism. In many ways it is a perfect for The Game.

On the other hand, no one has ever accused Asmodeus of being fair. A demon with such a close connection to Freedom would almost certainly be one of the Lilim – which means that even pardons come with a price to be paid.

This puts Abersumi in a perfect position to assist The Tarot, IntPol, and IntSec, though xe is not part of any of those bureaus. Nor is xe a part of P&P, though xir Word can clear several barriers between a reprobate demon and a temporary visa to the Corporeal Realm. Instead xe is one of the only barristers at the Hall of Loyalty to argue on behalf of demons who have already been convicted. In this regard xe considers xirself to be the counterpart to Mhir, Angel of Equal Justice.

However, the Halls of Loyalty are not the only place where Abersumi argues cases. Xe is also the Liege and Devil’s Advocate for County of Final Judgement; a territory located just outside the gates of hell. Whenever Daniel or Hutriel locate a soul whom they believe should be sent to heaven, it is up to Abersumi to decide if hell should grant the pardon uncontested, or argue to keep the soul.

Abersumi, Lilim of Pardons, Countex of the Plains of Final Judgment