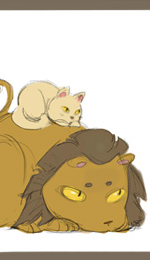 Kyriotate † Active † Canon
“The world is an animal,
wild and quick.”

Unofficial Writeups
To Say Nothing of the Beasts † Sean Borgstrom

In an earlier draft Jordi was named Alain – most likely after Alain Bombard. The best I can figure with the current name is that it is a tribute to (and inversion of) the St. George story.

If you know of another Jordi or Alain that has a strong association with animals, please let me know!

Dickcissel, Ofanite of Spiza Americana - Servitor of Jordi in service to Sandalphon  Before the dawn of time, Dickcissel was once one of the angels to …

Hispid, Spike-Haired Warrior - Hispid is a Malakite of Animals who specializes in punishing overaggressive predators, including such apex predators as humans, demons, and …

Adventure Hook: Hungry Like the Wolf - One of Jordi’s Malakim is running wild through the city. Their soul has been tattered and warped. They are currently …

Common Oaths for Jordi’s Malakim - Officially, Jordi’s Virtues are associated with canines such as dogs, wolves, jackals, and coyotes. I tend to take a more …

Just Another Rat: Zucker Bandicoot - The Zuck serves Jordi through the Angel of Rats. Like many a rat, he’s a scrounger, an information broker, and …

More than Beasts: Jurjen, Yuri, and Gerghe - The Game Master’s Guide briefly floats the idea of Jordi as the Demon Prince of Beasts. While this keeps his …

Verdin, The Little Bird - Mercurian of Christopher Verdin was forged of the stuff of Mercurians, but feels a stronger kinship with the Cherubim. They …

Anti-Fascist Strategies (by Archangel) - In light of the recent string of fascist rallies and counter demonstrations that have been taking place in the USA, …

Dukes of Hell: Naming Lusties - Adaptability is the name of the game for a Duke of Lust. Not only do they need/want to drop everything …

Malakite of Jordi Eyes the Opposition -
Numinous Corpus: Fauna - Many of the Ornamental Numinous Corpus from Liber Canticorum recalled some animal or other. Considering how much demons enjoy their bestial …

Songs for Jordi - In coming up with Jordi’s playlist I was faced with something of a dilemma. Did I want to use animal …

Jordi and David Read a Book - Image:  A bronze statue of a cherub reading a book, to its side is a brown and white cat peering …

Animals and Lightning - Last week a lightning storm in Norway took out an entire herd of reindeer. This is precisely the sort of …

Rzhani, Mercurian Angel of Horses - Rzhani is one of the few Servitors of Jordi to have made significant inroads into human/animal relations. The strength, speed, …

Jordi’s Emissary to Lawrence - Even when you’re on the “same side,” the tether of another Superior can feel very out of place. For example, …

To Say Nothing of the Beasts - If you’ve ever taken a close look at Jordi’s Choirs Attunements, you’ll have noticed something was missing. There’s no choir …

The Song of Serpents - Each one threw down his staff, and they became serpents. The Songs of Serpents calls upon both the literal and …