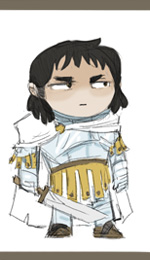 Malakite † Active † Canon
“The world is a blade that cuts the unwary.
Keep yourself finely honed and never cease to be vigilant.”

St Lawrence is one of the most widely venerated saints of the Roman Catholic Church. Legendary details of his death were known to Damasus, Prudentius, Ambrose and Augustine. Devotion to him was widespread by the fourth century.

Yohann, Malakite Angel of Punctuality - Yohann is a fastidious timekeeper and a relatively young Wordbound, all things considered. “He” was only promoted after the Reformation, …

Jaami, Archangel of Unity - Before time was time, Jaami was the chief administrator of Heaven. Then Yves convinced the venerable angel to make way …

Glaive, Seraph of Her Own Name - Glaive is an old soldier in Heaven’s Army. Although she serves Lawrence now, she came up through Michael’s ranks, not …

Virtues of the Eightfold Path - I have previously suggested that since Malakim are Virtues, anything viewed as virtuous would be a good candidate for a …

The Erotes - Common wisdom holds that Ethereals who look like angels either vanish or become angels. The Erotes are the Symphony’s most …

Bitigedilu, Angel of - Mercurian Wordbound of a Missing Word Bitigedilu is the Angel of …. Just one problem, he doesn’t know what … …

Gretchen Offenbach, The Sword’s Baker - Gretchen is a baker by trade. Like most Creationers, making for the enjoyment of others is important to her. She …

Anti-Fascist Strategies (by Archangel) - In light of the recent string of fascist rallies and counter demonstrations that have been taking place in the USA, …

Songs for Lawrence - Building a playlist for Lawrence is an exercise in cutting. Between jodies, sword dances, forging songs, duels, and just about every song …

Leggiadrous, the Graceful Emissary - Leggiadrous is a Friend of the Sword and one of Lawrence‘s emissaries to the other Archangels. She serves under Curtis, …

Hasmed, Elohite Angel of the Single Shot - Hasmed has always preferred a simple life. One angel, one gun, one round. If that is not enough to solve …

Itrasbiel, The Exorcist - Itrasbiel has seen humanity and he is convinced they will find their own way to Hell if the agents of …

Festinate, A Hastening Angel - Festinate is a “time study man.” His focus is on making things run more quickly and efficiently. The Ofanite takes …

Jordi’s Emissary to Lawrence - Even when you’re on the “same side,” the tether of another Superior can feel very out of place. For example, …

Legion: Good for GMs and little else - Legion is a great movie for an In Nomine game master to watch. An absentee god, angels fighting angels, outcasts …