As the end of time approaches, some demons have begun to work more in the open. For example, there is an exclusive, high end supper club where demons of gluttony have put themselves on the menu.

Entry to the club is exclusive and expensive enough that most Angels won’t even make it through the front door (assume status 6 or 5 with a good fast talk and sizable bribe for entry). Those who order from the VIP menu (which lists the performers by name) pay an additional price. Those who knowingly eat such infernal meat will become hellsworn (the full terms are in the menu, though phrased like a marketing gimmick).

In addition, the sous chef is a Lilim, so on the night’s she runs the kitchen she can impose geases on everyone who dines.

Repeat diners may even gain a bonus force – either becoming a Soldier of Gluttony or else eventually unraveling into so much dead meat (though this usually takes long enough that they cannot become dessert).

One of Jordi’s Malakim is running wild through the city. Their soul has been tattered and warped. They are currently bound to their vessel and trying to hunt down the Servitor of Haagenti that bested them. Unfortunately their instincts are so distorted by Discord that they’ve become a maneater.

If the party can’t help hunt down the Glutton and fast, they may be forced to put down one of Jordi’s Blackwings to keep it from doing more damage to the Symphony in its death throws.

Then again, explaining that to a distraught Archangel of Animals might not be the easiest of tasks.

I feel like I’ve done a rather poor job of introducing new magical items. Liber Reliquarum really does do a fantastic job of explaining how to go about creating and balancing new items. But, of course, knowing which items to introduce can itself be a bit of a challenge.

I figured the best way to break my fast on this topic was with, well, you know… END_OF_DOCUMENT_TOKEN_TO_BE_REPLACED 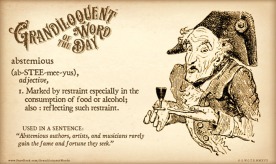 Abstemious is a Virtue of Judgment, one with a special commission to track down Angels who have succumbed to the sin of Gluttony. They are cold, dour, and without vice. The black-winged angel prefers to avoid human interaction – but when it becomes inevitable, they present themself as process server (a position they actually hold in several states).

END_OF_DOCUMENT_TOKEN_TO_BE_REPLACED

It was almost time to start. The coolers had been checked and re-checked; the ribs and tri-tip had been marinating for the past three night, and Sinetway had just checked the balance for the chicken rub this morning. If the gauges on his giant cast iron smoker were to believed (and he knew they were), he could start at any time.

They other cooks were also starting to figure it out, less talk of other jobs. More attention to the work space. It was a subtle shift, but not to an Impudite. The grills were the top of the chain now. END_OF_DOCUMENT_TOKEN_TO_BE_REPLACED

Abu Al’Murtad has a remarkably even temperament for one of the Habbalah. Slurs run right off his back, especially ones likening him to either an angel or a devil. After all, he is both, and he sees little reason to be upset by the truth.

No, Abu Al’Murtad reserves his punishments for the Almighty itself. It is for this reason that he names himself Apostate, though he makes it a point to follow all the tenants of Islam save for the love of god. Abu Al’Murtad believes that it was God’s will that the demon punish mankind, and this is precisely why he chooses not to. Instead the fallen angel heals them, restoring hunger where it had been lost to illness or abuse. END_OF_DOCUMENT_TOKEN_TO_BE_REPLACED

Elizabeth Bathory is a serial killer best known for having bathed regularly in the blood of virgins in order to preserve her youth. Her lands were in Transylvania and Hungary, and her exploits are said to have contributed to the Dracula myth.

Though Vampires do not gain any bonus Forces, humans who were already exceptional may bring the Forces they have already accumulated through with them into undeath. This is how I am handling the Blood Countess.

END_OF_DOCUMENT_TOKEN_TO_BE_REPLACED

The Four Horsemen of the Apocalypse may not have shown up as part of In Nomine’s Revelations cycle, but that does not mean that they need to be absent from the setting. After all, In Nomine is the sort of the game that encourages an Apocalypse of the Week.

There are a few different ways of handling the Horsemen.

One is that the Horsemen are Demon Princes:

While this is a fairly simple and easy to implement approach, it adds nothing to the setting. Another possibility is that the Horsemen are all Wordbound Servitors of particular note – but this is also somewhat limiting, as it locks a specific demon into each role.

END_OF_DOCUMENT_TOKEN_TO_BE_REPLACED

Adaptability is the name of the game for a Duke of Lust. Not only do they need/want to drop everything to serve their Prince personally, but there is no telling what the state of their fortunes or the world will be when their own private submission is through.

Any sphere of influence is flexible, and GMs should feel free to add. remove, or relocate any Duke as they see fit. END_OF_DOCUMENT_TOKEN_TO_BE_REPLACED

Today’s post comes from a conversation I was having with one of my old roommates. We were discussing In Nomine and gods and heavy metal, and they were joking that heavy metal might actually be hell’s music – and that all the mythological themes that show up in it were really an attempt to strip the corresponding associations away from the Ethereals who held them previously.

So naturally, I brought up Furfur: how he’s the Prince of Hardcore; how he’s given to excess; how I imagined his court being a fusion of metal and fanaticism; how I disliked the purely Islamic overtones of fanaticism that showed up in the Dark Khalid writeup.

So my friend asks: “Is there a Demon of Straightedge and a Demon of Veganism under him?”

There wasn’t before. There is now. I hope you enjoy them. END_OF_DOCUMENT_TOKEN_TO_BE_REPLACED