Poemen, the Demon of Not Them, is a lesser Barron in the Court of Malphas. He believes (correctly) that he has been granted a station beneath his capability but (incorrectly) that he is equal to a Duke or President.

To this end, he has established a secret society kept connected (traditionally) by an infernal publication (The Belligerent). Initially, Poemen hand selected those demons to be in the society (generally those whose Words or outlook he assumed would make them subservient to him once Lucifer recognized his claim on a Principality), but each of them have in turn added more, and generally now anyone who will regularly pay the fee in essence for a subscription is considered a member. END_OF_DOCUMENT_TOKEN_TO_BE_REPLACED

At the time of Malphas‘ fall, Shapinah was his senior Elohim. Rather than follow her boss into hell, the well endowed angel fought him, and what remained of her afterwords took the Malakim vows. Much like Malphas, Shapinah’s skill has always had a knack for shaping how things break (stone in particular, but steel, bone, and hearts work just as well). However, unlike her former boss, she has always favored clean breaks. END_OF_DOCUMENT_TOKEN_TO_BE_REPLACED

Pavo Quintain is a freelance reporter who is trying to make sense of an increasingly illogical world. He is accompanied by his friends Varun and Amaya. Both are supportive, but Pavo knows they only tolerate each other for his sake. What he doesn’t know is that they are each soldiers on the opposite sides of the eternal war between Heaven and Hell. END_OF_DOCUMENT_TOKEN_TO_BE_REPLACED

The current crisis has meant that lots of folks are dealing with government bureaucracies struggling with the twin strains of excess demand and short staffing. However, it is always fun to imagine that these problems are caused by malicious actors rather than overwhelmed systems.

These demons were originally envisioned as minor nuisances (7 Force) or comic relief, not as major antagonists – but since they do not have stats yet, they could be built more powerfully if that’s what your game needs. END_OF_DOCUMENT_TOKEN_TO_BE_REPLACED

Since being elevated to Archangel, Cassiel has been known for making some excentric choices. Among them, petitioning the Seraphim Council to grant a Word to a redeemed Shedite of Factions who had not yet finished healing from their centuries in service to the fallen. END_OF_DOCUMENT_TOKEN_TO_BE_REPLACED 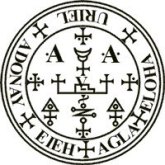 I have been trying to figure out what I can write for heaven that could serve as the counterpart to the Duchies of Hell series. And the truth is that nothing will quite be the same. In Nomine has made it quite clear that Heaven does not observe the same feudal system as hell, nor are the Archangels expected to adhere to a uniform structure the way the Princes of Hell are.

But this really just means that I need to look at each Archangel individually. Lawrence openly embraces hierarchy. Dominic embraces it somewhat more covertly. Jordi seems to let his masters make and rearrange their own hierarchies spontaneously so long as it is never formalized.

Today I will be examining Uriel END_OF_DOCUMENT_TOKEN_TO_BE_REPLACED

Some of my other tethers projects are taking longer than expected, so I figured it was time for this romp beyond the firmament.

Since most mortal forms can’t survive full vacuum (and since there are no mortals to witness them), it’s safe to assume that any Angel or Demon manifesting at an interplanetary tether will be in celestial form. END_OF_DOCUMENT_TOKEN_TO_BE_REPLACED

To give a better idea of the difference between the courts of Media and The Game, I have decided to examine how each Prince would handle the Demon of Propaganda and the Demon of Post Truth. END_OF_DOCUMENT_TOKEN_TO_BE_REPLACED

Official materials do not offer much insight into Malphas upper court, but we do get two very interesting tidbits.

This means that Malphas has probably established a system that puts his landholders and wordholders into direct opposition. END_OF_DOCUMENT_TOKEN_TO_BE_REPLACED

Hamid should never have been sent to earth. They see that now. Perhaps the lesser orders can find a place here, but for a noble Seraph it is nothing but a gigantic torture chamber. One can hardly set one foot in front of another without an another assault of deceit.

When the pain first began Hamid demanded Marc return them to heaven. The Archangel refused, stating that it would be good for Hamid to learn some humility. Humble. That’s a joke. As if Marc had ever been humble before anyone but god. Hamid told him so. It did not go over well.